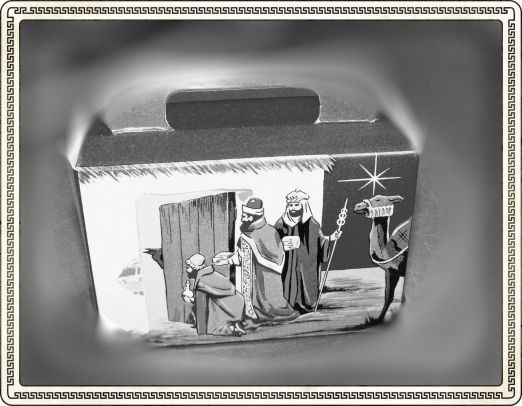 The holidays are once again upon us and all of the old memories come flooding back as we place precious moments, cleverly disguised as Christmas ornaments, so very carefully on the twinkling light laden evergreen.  Some memories bring a smile to the face as you reflect back on a different time, perhaps a long forgotten place; the memory, once lying dormant, nestled deep in the recesses of the mind until a sight, smell or event once again revives the remembrance in vivid details.  Thus is the case when I see a candy orange slice or old fashioned hard candy.

I grew up in the sleepy town of Nelsonville Ohio, tucked in the Hocking Hills of Zaleski State forest.  My family went to the Church of the Nazarene on Adams Street where my spiritual foundation was birthed.  The church itself was a blonde block split level building with stairs both leading up to the sanctuary and downward to the Sunday school classrooms.  The windows in the sanctuary were all made of stained glass with names of those who donated to the building of the church, etched in the bottom of each window.  Back behind the pulpit and the choir loft was a very large, round stained glass window with what appeared to be curious and perhaps mischievous cherubim peeking out from and around puffy white and gray clouds. Those same angelic faces also gave many a child an impressive fright as they seemed to stare and follow your gaze if you dared to look too long.

Our family mostly went to Sunday school and seldom attended church unless there was a special speaker or possibly a visiting missionary.  The exception came during the Christmas season.  Every year, I would be involved in the children’s Christmas program in some way, whether it be a small bible verse to say or, as I got a little older, a speaking part in the Christmas pageant.  And every year I would fuss and fret over my insignificant part, not wanting to go up in front of “those people”; the congregation which looked to me as scary as the angels in the windows.

There was only one thing that kept my eye on getting through this hideous, inescapable ordeal; the Christmas box.  You see, on the Sunday before Christmas after the pageant was over and everyone was dismissed from the service, everyone received a treat box.  I know Mary and Joseph had the gifts of gold, frankincense, and myrrh presented to them by the Magi but we had the treat box and piece of fruit, which seemed of equal value, given to us by the big guys, men from the church that seemed to tower over us kids and would many times have to stoop down to hand us our treasures.

Unable to curb our enthusiasm and curiosity, as soon as we clambered into the back of the car, my siblings and I removed the scotch tape that bound the box and carefully opened the lid, like a treasure hunter investigating his discovery.  Aside from the choice of a Red Delicious apple or navel orange, the box contained an assortment of incredible edibles that would sure to satisfy the taste buds for days to come. Coconut bonbons, peanut clusters, chocolate drops, walnuts, sugar coated orange slices would greet you as you opened the box as well as an assortment of old fashioned hard candies which made up the majority of the candied treasure chest.  My favorite was the raspberry hard candy that was filled with a juicy center and would burst in your mouth as you clamped down.

I would always choose the Red Delicious apple which I could quickly devour and toss the core.  My sister, Jennifer however, always chose the navel orange as we headed down the church steps and to the awaiting car.  Jennifer didn’t just eat the orange; it seemed she held a ceremony for it as she celebrated the citrus in her hands.  Jennifer would carefully lay out a paper towel and peel the orange rind, piece by piece until her orb resembled a raggedy softball.  Then she would separate the orange segments and isolate just one, where she would slowly and painstakingly remove all of the membrane until the orange nectar was exposed.  She would then stick half of the orange segment into her mouth, close her eyes and bite down, orange juice running out of her mouth and down her chin.  At times, there would be a soft moan of gratification and the process would repeat itself until the fruit was completely gone; it was as exciting to watch as watching paint dry…

As I look back on those times and reminisce, I have to smile and shake my head, for something as small and insignificant as a treat box in an adult’s mind, was so special and anticipated in a child’s.  But I also have to shake my head at us adults, who constantly need to be reminded of what the true meaning of Christmas actually is; that Hope was born on Christmas Day and the possibility now exists for us to live eternally with and for the One who gave His life so we may never truly die.  Like the child of my past, anxiously waiting for that treat box, we need to daily wait with great excitement and anticipation what blessings our Lord has for us as well as what service, task and/or ministry He needs for us to carry out.

As I entered adulthood with all the different responsibilities it entails, I was able to take part in ordering the contents and filling the treat boxes for that same local church.  I learned that we had far fewer chocolates in the box as opposed to hard candies because of cost and that it really was a financial struggle for the church to continue providing the fruit for the congregation.  But I also knew that everyone involved felt it was well worth sacrificing from another line item area to ensure everyone had a special treat in their hand.  And nothing else felt more rewarding at the time than bending down and handing a special treasure, the Christmas box, to a child who had just performed their heart out for a very gracious loving congregation…

3 thoughts on “The Christmas Box”