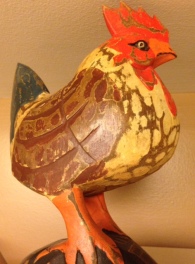 Her “Trilogy of Terror” began when she was looking for me in the house which was getting a little dark since it was early evening and we hadn’t yet turned on lights.  I heard her calling my name but I remained silent as my juvenile side took over and I waited until she stood in the dark hallway.  I flung my jacket out of the bedroom and into the hallway; the “cloak of death” hurled itself toward Jenny and she let out a scream, stammering back as if she would surely faint.  I was completely prepared for a beating from that one.

The second small scare occurred when we were lying in bed, watching some TV when all of a sudden Jenny looked up and screamed “SPIDER”!!  It turned out to be a large mosquito which I quickly squashed with a tissue.  The “Peace de la Resistance” occurred as we were preparing for bed.

As a general routine, I take the dog out for one last elimination thus eliminating the middle of the night whines.  On this particular night, we were receiving torrential downpours.  I let Izzy have a moment of solitude as I stood in the doorway with my back to the door and the Christmas wreath hanging from it.  I had on my hooded robe as I normally do.  After Izzy returned, I closed up shop, headed up the stairs and waltzed in the bedroom.  About that time, I felt air on my neck, heard a “whoosh” sound and saw a dark form swoop over my head and land on one of the pictures on the other side of the room.  Jenny let out a blood curdling scream and dove under the covers.  A Carolina house wren had evidently been in the wreath to escape the deluge, jumped in to the hood of my robe and hitchhiked his way into the house.  The bird was staring down his very long, sharp beak at me with small beady eyes and I just knew he wanted to peck my eyes out!

Jenny and I developed a strategic game plan on how to isolate our feathered friend so we could catch and free the little pooper.  Armed with a long nylon feather duster and bath towel, we closed the doors to all the other rooms which left the kitchen and living room exposed.  The little flyer flew into the kitchen and up on the cabinet ledge; he must have thought he was in an aviary version of little shop of horrors as positioned on every cabinet ledge were Jenny’s still life Hens & Roosters she had collected over the years.  The pointy beaked wonder flew back and forth between and on top of the variety of ledge fowl; meanwhile, Jenny followed suit with feather duster in hand trying to corral the feathered beast. We orchestrated our bright idea of turning out every light except for the one at the back door.  After several minutes of failed attempts to lure him to safety, a combination of a samurai duster, matador cape bath towel and ultimate fatigue on the part of the bird finally brought him down to the floor by the back door.  I urged him on out with the towel and that was that.

All the while we were working to free our uninvited guest back to the great outdoors, it struck me how we just wanted him safe and uninjured, back to where he belonged.  God must feel that way with us at times when we flit about from here to there, wanting to do our own thing when all He wants is for us to be safe under His guidance and protection.  As Psalm 91:4 NIV puts it, “He will cover you with his feathers, and under his wings you will find refuge; his faithfulness will be your shield and rampart.”  So often, we just don’t get it.  Our selfish nature screams out for the “freedom” WE deserve and when God tries to guide us or chastise us for the greater good, we cry foul!   Unfortunately, all along we are like that bird, flying back and forth from one ledge (vice, habit, sin) to another, trapped by our own distorted sense of freedom.  If we could just stop for once, rest, take a breath and allow our Heavenly Father to pick us up and release us into His perfect will where we would be totally free indeed…

Coincidentally, after all the ruckus was over and the bird was safe, we still had to clean up all the mess he left behind including bird droppings and small feathers everywhere.  But we could still hold on to the satisfaction that one of God’s creatures was still safe and able to once again fly free.

Matthew 6:26 ESV  “Look at the birds of the air; they neither sow nor reap nor gather into barns, and yet your heavenly Father feeds them.  Are you not of more value than they?”