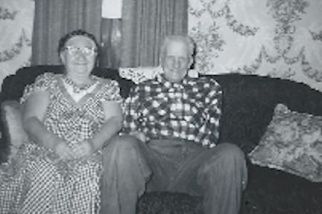 Have you ever had the opportunity for a second chance in life?  The old saying goes, “you never have a second chance to give a good first impression”; but we are also taught to go that extra mile and give others an opportunity to prove themselves.  Many times in a young child’s life, perception IS reality; and part of that perception involves a type of judgment.  Isn’t it interesting how we judge people at times?  Instantly, perhaps harshly, and without merit, we analyze someone’s physical attributes, mannerisms, and verbal signatures; after which we mentally determine whether we want another encounter with the subject of observation.  I guess we grandkids were no different in that respect…for we all agreed that our grandpa was mean!

Grandpa Phillips was an intimidating looking old man with skeletal like facial features and a shock of snow white hair on top of that skeleton head.  Earlier in life, perhaps at a low point, our grandpa attempted to take his own life.  Some would call it a twist of fate and others, a brush of an angel’s wing, but our grandpa missed his mark and blew his left arm off instead.  That absence of an arm in an empty sleeve, tucked into his trousers completed the total ”evil scarecrow” appearance.

Grandma and Grandpa Phillips lived in a small hamlet called Doanville, just outside of our hometown of Nelsonville in Ohio.  Driving up to their house, I always got butterflies in my stomach and a sense of dread enveloped me.  Their small, white house was nestled behind two gigantic pines, standing tall and majestic like two forest green soldiers standing at attention.  The walkway led beyond the gate and between the two towering trees.  The wind, whistling through the massive evergreens, gave an even more ominous feeling as we approached the dark, dank abode.

Grandpa Phillips was the “watcher” of their front porch when family came to visit.  He seemed to delight in brandishing his belt or razor strap, threatening the visiting little yard apes from climbing the expansive banisters, which made the temptation to mount the white, wooden steed just a little more appealing.

Mom would tell us from time to time that grandpa wasn’t always like that.  She had fond memories of her dad reading her bedtime stories at night.  The only stories I could envision were grotesque fairy tales where wart laden witches devoured innocent little children, lost in the wood…

However, somewhere along the line in grandpa’s life, something had definitely changed.  I didn’t know the details, only that grandpa had accepted Jesus into his life.  He asked my dad if he could pick up grandma and him for church sometimes at the Church of the Nazarene on Adams St.  They both sat toward the front of the sanctuary and I remember a bright smile on grandpa’s face during the service.  My perception of grandpa certainly changed as he himself was changing from week to week.  John Edward Phillips had been given a second chance at life after his botched attempt at taking his own and now, his entire life had eternally changed as he fully embraced his new life in Christ.  I remember going Christmas caroling with our church in 1970 at their house.  Both of my grandparent’s faces were just beaming as they listened to our less than perfect voices belting out carol after carol.  Grandpa passed away on the same day we celebrate Christ’s birth each year, December 25th of 1970.

There are many examples of God giving second chances in the bible.  Jonah’s disobedience to God resulted in Jonah being swallowed by a huge fish where he literally spent three days and nights in the stench of his own poor decision.  But God gave him an out, being thrown up by the fish so he could be submissive to God and preach to the people of Nineveh, giving them a chance to turn from their evil ways.  God agreed with Abraham to spare the cities of Sodom and Gomorrah from total destruction if only ten righteous men could be found in the cities.  Saul, the great persecutor of the Christians in the New Testament was literally stopped in his tracks by God using a bright light that temporarily blinded him and got his attention to the point of conversion.  Saul of Tarsus became the Apostle Paul, the great evangelist.

We’ve all been given second chances in life, regardless of circumstance.  I guess we could say we’ve been given many chances in our lifetime!   They may not have been as dramatic as a near fatal accident and it could have been something as simple as the act of forgiving someone or perhaps the restoration of trust.  Regardless of the situation in life, God does not give up on us.  He went as far as sending His son to the cross for our sins, so we could indeed be reconciled back to Him and not have to face eternal separation from God.  Talk about going the extra mile!  That’s the ultimate love in action, pure and simple…

I have always heard that somewhere buried along the fence line of the Greenlawn cemetery, lays my grandpa’s left arm.  But I am very confident that his soul is rejoicing right this moment as he worships our God of second chances.

Therefore, if anyone is in Christ, he is a new creation. The old has passed away; behold, the new has come. 2 Corinthians 5:17 (ESV)